You’re accustomed to reading about probiotic microorganisms that improve the digestive health of your dog by displacing harmful bacteria. However, there is also probiotic yeast. Friendly yeast Saccharomyces Boulardii functions as a probiotic. Its claim to fame is that it is a probiotic that aids in the management of diarrhea, particularly diarrhea brought on by antibiotics. Look at S. boulardii in more detail here.

What Is S. Boulardii?

Saccharomyces boulardii is a tropical yeast. Henri Boulard, a French chemist, created it in the 1920s using lychee and mangosteen fruit. He was thinking of using wild yeast to make wine. But after seeing Indonesian villagers chewing on lychee and mangosteen skin to relieve their cholera symptoms, he went on to isolate this yeast.

S. boulardii has become one of the most researched probiotics in the world. It’s been studied as a potential solution for countless ailments. To date, it’s known for its importance in managing gastrointestinal (GI) issues and diarrhea. But it also shows promise in helping with other conditions, such as …

However further studies are still needed before claiming it as an unequivocal treatment for these problems.

Let’s get right down to how S. boulardii can help your dog.

Does Your Dog Need S. Boulardii?

Yes, he does. This gut-friendly yeast probiotic is safe for dogs. And it’s the probiotic with the most supportive evidence for veterinary use. As a probiotic, it brings health benefits to the GI system and ultimately, the immune system … and it stops diarrhea!

More importantly, S. boulardii prevents diarrhea stemming from antibiotic use. So if you need to give your dog antibiotics, you should give him S. boulardii as well. 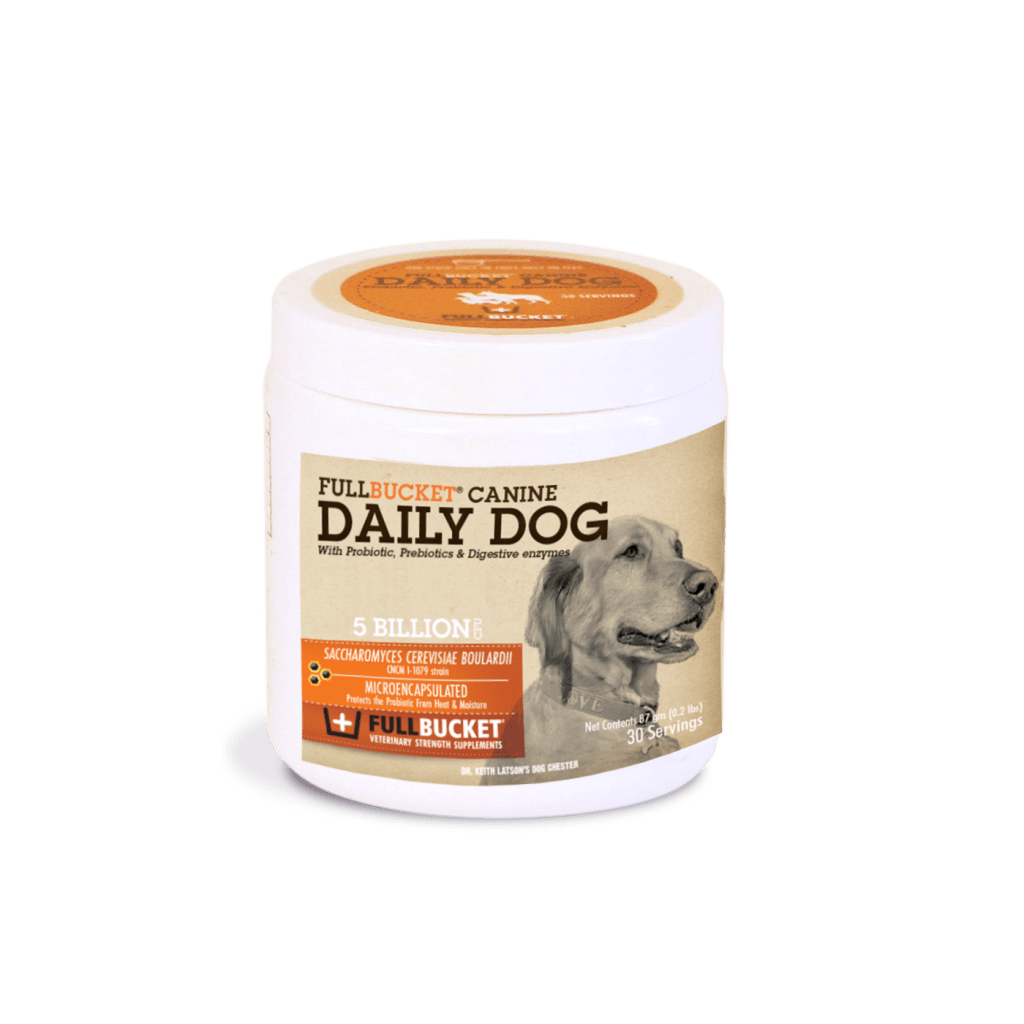 The FullBucket Daily Dog is a concentrated yeast-based formula that naturally supports digestion and immune function in adult dogs utilizing probiotic, prebiotic, digestive enzymes & L-Glutamine. It’s all natural, formulated and used by veterinarians, and assists in a healthy gut microbiome.

In a recent trial, S. boulardii addressed acute and chronic diarrhea in humans … and another trial in dogs showed the same benefits. That makes this yeast a very good addition to your dog’s probiotic regimen.

Probiotics To Help Your Dog

The idea of probiotics and beneficial bacteria is still a fairly new concept in the medical world. And it’s only been the last decade or 2 when you could go out and actually buy good bacteria—probiotics. And it was a natural extension that if it helps people, it can help your dog too.

The beneficial bacteria in probiotics play a major role in your dog’s digestive system and his microbiome …your dog’s gut. It’s now known that 90% of your dog’s immune system starts in his gut.

Beneficial bacteria break down food into nutrients that are absorbed into the body. They also raise the acidity so that bad bacteria cannot thrive. They also produce short-chain fatty acids (SCFA), which play a variety of important roles in the body, including immune system support.

The best probiotics to repair your dog’s microbiome and reduce diarrhea after antibiotics are S. boulardii and soil-based probiotics (Bacillus subtilis and Bacillus coagulans), according to a 2018 study. Probiotics found in soil form spores. This indicates that they develop a tough layer that shields them from heat, stomach acids, and the majority of medications. The colon, not the small intestine, is where they should colonize, and this aids in that process.

The study also found that Lactobacillus probiotic, commonly used after antibiotic use, actually caused a delay in the microbiome’s recovery when compared to the group given no probiotics.

How Does S. Boulardii Work?

The capacity of S. boulardii to pass through the GI system unharmed is one of its distinctive characteristics. It can then gather and concentrate in the intestines as a result. Because of this, S. boulardii can treat intestinal illnesses brought on by Escherichia coli and Clostridium difficile. Since they prevent the spread of the genetic material that results in antibiotic resistance, yeasts like S. boulardii are effective probiotics for fighting pathogenic bacteria.

So that’s why these qualities give S. boulardii a distinct advantage over yogurt and most of the dog probiotic products on the market.

What Are The Benefits of S. Boulardii?

Antibiotics are unable to kill S. boulardii, making it unusual. In other words, it safeguards the healthy gut flora when administered together with antibiotics. It boosts the immune system and battles bacterial, parasitic, and fungal illnesses.

S. boulardii manages and prevents many forms of diarrhea associated with:

Plus it does the following:

It is a crucial component of the digestive system, protecting the lining of the intestines against dangerous microorganisms. Additionally, it aids the digestion and absorption of nutrients by supporting digestive enzymes.

Can S. Boulardii Fight Yeast In Your Dog?

The primary role of S. boulardii is not yeast control. However, studies indicate that it works particularly well against Candida. Its ability to create caprylic acid, which aids in dissolving yeast-protecting biofilms, may be a contributing factor. Additionally, it can aid in digestive problems brought on by persistent inflammation.

How Do You Give S. Boulardii To Your Dog?

In order to prepare your dog’s intestines for a round of antibiotics, you can provide S. boulardii. Or you could administer it as soon as diarrhea develops. You can also add it to your dog’s regular probiotic dose. Other dog probiotics may also contain S. boulardii as a component.

Except for grinding up lychee fruit skins and making a tea like the Indonesians did, there aren’t really any food sources for S. boulardii. Therefore, you can get S. boulardii products in the form of capsules or powder over the counter or online. You should search for organic products that haven’t had any extra fillers added.

S. boulardii can be included in your dog’s food. Make sure your dog drinks enough of water to revive the yeast and help with digestion. If you purchase a product designed for dogs, simply adhere to the instructions. If you purchase a human product, assume that the dosage is for a 150-lb person and make adjustments for your dog’s weight.

Studies have used the amount of 250-600 mg as a child’s dose over 4-6 days. That’s about 5-10 billion colony-forming units (CFUs). S. boulardii is not destroyed in the gut. It’s much harder than dairy-based probiotics so it lasts longer and you don’t need to give it as much as other probiotics. In general, you can give a half-billion to 5 billion CFU to dogs.

Things To Watch For

Reduce the dosage of S. boulardii you give your dog if he becomes constipated while receiving it regularly. S. boulardii may occasionally result in bloating and gas. Don’t administer yeast together with any antifungal drugs because yeast is a fungus.

Don’t give it to dogs that are expecting or nursing. With S. boulardii, you can now boost your dog’s immune system before an illness takes hold. Use it to safeguard against and treat digestive issues as well as to promote your dog’s general well-being.

Saccharomyces boulardii: What Makes It Tick as Successful Probiotic?

One thought on “Saccharomyces Boulardii For Dogs”