How are cancer cells different from normal cells? That’s a simple, yet complicated, question to ask. One of the words you will hear pop up often though is apoptosis. If you’re learning about the science of cancer, you’ll learn that apoptosis plays a major role in all cancer types regardless of species.

Apoptosis, commonly referred to as cell suicide(I know, it sounds harsh, but it’s a good thing!), allows the body to get rid of damaged cells or cells that are no longer of any use.

Cell suicide is a completely natural process and it happens every day in every animal. Take a look at your dog’s paws. Those were created by apoptosis. Portions of the paw needed to commit cell suicide in order to form those perfect little paws. It’s kind of like an ‘on/off’ switch. The body tells cells when the apoptosis switch needs to be turned on. Then again, tells the cells when the apoptosis switch needs turned off.

Apoptosis is a critical component of our dog’s (and our own) health. The genes that control apoptosis are built into the DNA of every cell and continuously monitor a cell’s health. Is the cell damaged? Has the cell been affected by a virus or bacteria? Is the cell getting too old to work properly?

Putting this in easier terms, cancer cells act as a type of hijacker to our dog’s body. The body doesn’t recognize them as being “bad” and allows them to grow and spread throughout the body. All cancer types have a lack of apoptosis.

Apoptosis is a complicated process, but fortunately we are discovering new advances in science every day. Most recent discoveries have found apoptogens (agents to turn on the apoptosis switch) can be found through diet. A specialized diet can trigger apoptosis genes to turn on.

Luteolin is a bioflavonoid found in celery, green peppers, peanut hulls, and artichokes. Luteolin has been found to induce apoptosis in cancer cells using several mechanisms.

Luteolin starves the cancer cells by interfering with glycolysis (cancer loves sugar– luteolin disrupts their sugar intake). Luteolin has also been found to destroy the ability of cancer cells to replicate their DNA and cut off their blood supply making it more difficult for the cancer cells to spread (metastasize) to other portions of the body.

Scientifically, according to research, “this flavonoid and its glycosides are widely distributed in the plant kingdom; they are present in many plant families and have been identified in Bryophyta, Pteridophyta, Pinophyta and Magnoliophyta.

The ability of luteolin to inhibit angiogenesis, to induce apoptosis, to prevent carcinogenesis in animal models, to reduce tumor growth in vivo and to sensitize tumor cells to the cytotoxic effects of some anticancer drugs suggests that this flavonoid has cancer chemopreventive and chemotherapeutic potential.”

Turmeric is a common Indian spice commonly found in curry dishes. One of the bioflavonoids of turmeric- curcumin– has been found to be extremely advantageous to the body. First of all, curcumin has been found to turn the apoptosis switch back on.

Curcumin has also been found to slow the process of angiogenesis (cancer’s ability to develop blood vessels to eat) resulting in cancer cells essentially starving to death. And, it puts a damper on DNA replication. 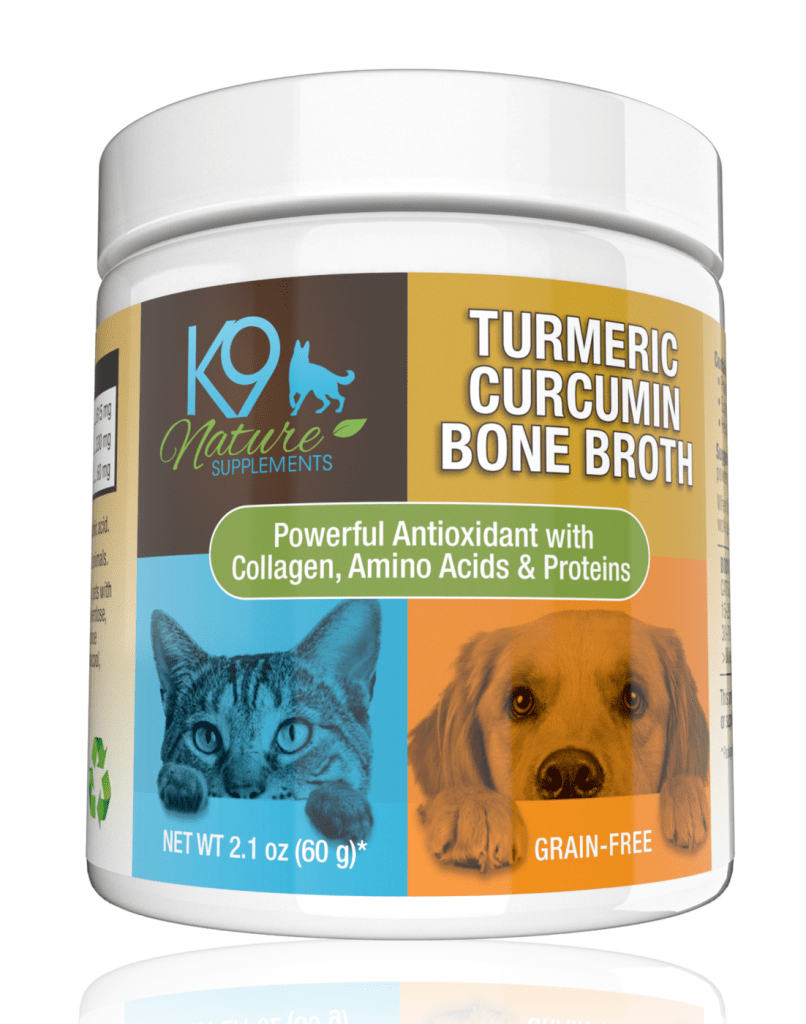 Bone broth is jam-packed with collagen, amino acids, proteins, vitamins, and minerals that help your pet’s body heal, recover and function at its best.

A study published by Nutrients stated “curcumin, a polyphenol extracted from Curcuma longa in 1815, has gained attention from scientists worldwide for its biological activities (e.g., antioxidant, anti-inflammatory, antimicrobial, antiviral), among which its anticancer potential has been the most described and still remains under investigation.”

The study continued to state “the therapeutic benefits of curcumin have been demonstrated in multiple chronic diseases: inflammation, arthritis, metabolic syndrome, liver disease, obesity, neurodegenerative diseases and, above all, in several cancers.”

The ultimate goal is to keep the apoptosis switch turned on. Our dog’s normal, healthy cells die naturally. But, cancer cells do not. They continue replicating until we do something to make them stop, or until their diet, or a supplement helps us starve them and turn the cell suicide switch back on.

That’s one of the many reasons a high-quality dog cancer diet is so critical when you are on your dog cancer journey.

As someone who was once not involved with holistic options, I understand how mind-blowing it is to know how much of a difference diet can make for dogs and people with cancer. To be honest, it’s something I didn’t use to believe in.

Now, with years of education and experience, I understand the science behind nutrition and the importance of a well-balanced, specific cancer diet. If you have any questions, feel free to look around the blog!

Best wishes to all of you on your dog cancer journey!

4 thoughts on “Understanding Apoptosis and Cancer”